MCI-2005 is a water-based, organic, corrosion inhibiting admixture for the protection of metallic reinforcement in concrete structures. When incorporated into concrete, MCI-2005 migrates towards reinforcement. Once there, it forms a monomolecular layer that inhibits the corrosion reaction on both anodic and cathodic components of the corrosion cell. This effect can be quantified by the increased critical chloride threshold and subsequent reduction in corrosion rate. MCI -2005 has been awarded USA BioPreferredSM designation (www.biopreferred.gov). 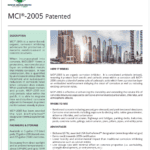