MCI Construction Film is a blue colored polyethylene film designed for use in the construction industry. Unlike conventional plastic films used for interleaving, vapor barriers, etc., MCI Film contains technology to inhibit corrosion of both ferrous and non-ferrous metals. In areas where conventional films are used, metal parts that come in contact with the film are susceptible to corrosion. The technology incorporated into MCI Film inhibits corrosion on metal parts and structures it is used with. 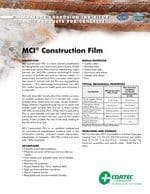